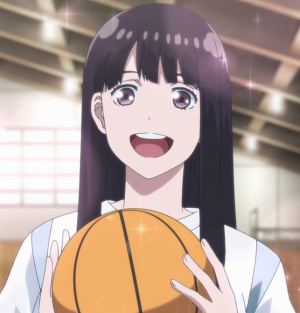 Member of the Basketball team

Mio Odagiri (小田切 美緒, Odagiri Mio) is the school idol (due to her beauty and kindness) who was helped by Aoyama-Kun in a basketball practice and she gained respect for him with his help.

Mio is introduced as a helpless girl playing basketball who was described as the most popular girl in the first year as she is well known for her beauty and kind nature, which has garnered her many supporters from other years as well.

She is very physically strong as shown when she easily overwhelms and defeats Aoyama-Kun at Arm-wrestling with the latter really struggling against her.

She was helped by Aoyama for a better approach at basketball and when she succeeded she thanked him by patting him on the shoulder, becoming the first person to physically touch him which shocked many. Following this, she now refers to him as "Master" as a form of respect.

While Mio is in her first major role, she went to Aoyama-Kun for help and he offered little advice. Afterwards, Odagiri became one of his associates with it being thought that they were dating but that was not the case.

Although, it is hinted that she really does have a crush on him as she blushes and somewhat gets nervous whenever she is around him.

In the most recent Chapters, it is further confirmed by her interactions. In Chapters 106-107, Mio confessed her affections to Aoyama, but he rejected Mio as he instead has devoted himself to Moka Gotou instead, despite his germaphobia being a strain on the relationship. In the last chapter, it is shown that Mio has moved onto a new relationship, but she still has a soft spot for Aoyama.

Retrieved from "https://keppeki-danshi-aoyamakun.fandom.com/wiki/Mio_Odagiri?oldid=878"
Community content is available under CC-BY-SA unless otherwise noted.