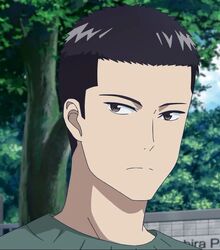 Tsubasa Umeya is a freshman from the judo club member. He is an excellent judo athlete and the biggest hope for the judo club.

Tsubasa is very skilled in Judo, and has been participating in the sport for his entire life. However, he quit the Judo club after he met the soccer club manager named Moka Gotou and he fell in love with her.

Even after learning that she is in love with Aoyama-Kun, he decided to support her love instead, stating that "not every couple is destined to marry", and that he "just [has] to be patient until the time comes".

Retrieved from "https://keppeki-danshi-aoyamakun.fandom.com/wiki/Tsubasa_Umeya?oldid=763"
Community content is available under CC-BY-SA unless otherwise noted.